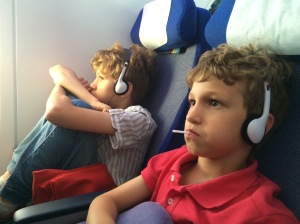 Phew, we made it back to the plane – but only just! I was calmly browsing the souvenir shop at Auckland international airport as we waited for our lunch when I heard via the airport speakers the names Lucas and Thomas being called. I looked back at our table and the boys were there with Paulo so I thought I must have misheard the announcement. But a few seconds later I heard the speaker again, this time I devoted my full attention to it: “Paulo Emilio Pinto, Rosana, Lucas and Thomas report immediately to gate 4C – your flight is about to depart”. I panicked, I knew we were nowhere near gate 4C. I looked around and could not see my family – have they rushed to the gate ahead of me? I stopped for a few seconds to take a deep breath and refocus. I looked around again and found Thomas still with the restaurant pager in hand waiting for our lunch and Paulo chatting to an acquaintance. Surely they were oblivious to the threat that we were about to miss our long haul flight.

Now, this is a week before Christmas, you can imagine what would happen if we did lose our flight. So as we weaved our way through the crowd my mind was racing worrying about the prospect of having to cough up the airfares again and the nonprobability of finding four seats on a plane to Brazil anytime soon. It probably took us three good minutes to reach gate 4C but it felt like an eternity. All passengers had already boarded – there was no one around but two unfriendly woman who told us off for being that late. Guilty as charged but it felt like being told off at school, we felt deeply embarrassed. Surely we created more work for them – they had to get a bus just to take the four of us across the tarmac to the plane but a small dose of customer care would have made the this stressful experience a bit easier.

The bus trip to the aircraft was tense, we’re expecting an even meaner reaction from the flight crew as well as booing from the expecting passengers, stranded on the plane because we decided to have lunch. But as the bus approached the plane, we could see the crew looking out the door and to our relief, they still had a smile on their faces. High five to Lan Chile crew! We were directed to our seats without major embarrassment, just a few looks from our fellow passengers but no collective display of disappointment.

We almost missed our place because of the dam auto-pilot. We do this trip every year so we know the drill: we stop over in New Zealand for a couple of hours, go to the bathroom, pass through the airport security and then the foodcourt, before going back on the plane. We always keep an eye in the flight information display but this time we didn’t. We just went through the motion without really thinking much, not realising that the stop over this time was less than two hours. We were tired and hungry and that didn’t help but with all the mindfulness that I have been doing and preaching, I felt a bit silly that I was so mindless in this instance.

All ended well but we ended up boarding the plane with an empty stomach. The pager was probably beeping at our empty table in the foodcourt by the time we embarked and a lucky passenger must have just scored a free lunch.

Capturing the world through photography, video and multimedia